Marilyn Ferguson once beautifully said, “Over the years your bodies become walking autobiographies, telling friends and strangers alike of the minor and major stresses of your lives.” Our souls are much older than our bodies and with several reincarnations; our soul has accumulated positive as well as negative experiences, according to the Karmic Law of Cause and Effect. All souls have experienced pollution, deformation, fragmentation and injury through individual as well as collective Karma. (The Soul, 2010) Hence, it is only natural to believe that connecting with one’s soul can provide pathways to stress management in our current every so busy life, buzzing with a thousand ‘to-do’ lists and life pressures.  My induction into Qigong enabled me to connect with my deeper self and I was able to find another avenue – besides my yoga and meditation practice – to manage my day-to-day stresses of life.

In my very first class, I was intrigued and fascinated to learn that human beings are conductors of energy between the earth energy and heaven energy. (Qigong class, Rudramandir, 2011) Hence, the natural conclusion I drew from that was that any imbalance in the earth energy – often caused by humans – can affect the humans and likewise the other way around. Ever since the tsunami and the earthquake in Japan, I have also been thinking if the mother earth is trying to give us subtle messages that we are not connecting with. As I listened and tried to absorb the concept of ‘Qi’ – The art of cultivating energy – (Cohen, 1999), it was evident to me that just like human beings have different meridian points (also known as acupuncture points), so does the mother earth. (The Soul, 2010) And just like blockages in our energy channels can lead to diseases, blockages in the earth’s meridian points can lead to the emergence of natural calamities like earthquakes and tsunamis. This experience made me want to explore Qigong further.

According to the Traditional Chinese Medicine community, the origin of Qigong is commonly attributed to the legendary Yellow Emperor and the classic Book of Internal Medicine. (Giovanni, 1989) When Buddhism with its origin in India was transmitted to China, some of those practices were assimilated and eventually modified by the indigenous culture. The resulting transformation was the start of the Chinese Buddhist Qigong tradition. (Zucher, Erik 2007). Chinese martial arts influenced by all the different elements within Chinese society adapted and modified Qigong theory with the goal of improving their fighting abilities. (Liang, Wen-Ching and Breiter, 1997). Specialized text was available but was cryptic in nature and therefore limited to a selective few. For the general population, Qigong practice was a component of Traditional Chinese Medicine. (Dyhr, Thomas J., 2008)

During the turmoil of the fall of the Qing Dynasty and through to the Republican Period (1912–1949), Chinese society was fighting for its own survival and there was very little thought on the development of Qigong. Concerted efforts to re-establish Chinese culture under a new ideology began after the creation of the People’s Republic of China in 1945. The new ruling government under the leadership of Mao Zedong rejected all ties to traditional Chinese philosophies such as Confucianism, Taoism and Buddhism. Instead, the Chinese government promoted a socialist view. Through a series of government directed programs that lasted for nearly three decades (1949–1976), the entire fabric of Chinese society was torn apart and reorganized. It is in this environment that the current attitude to Qigong in the Mainland was born. (Medicine in China, 1985)

In the early 1950s, Liu Guizhen, a doctor by training, used his family’s method of body cultivation to successfully cure himself of various aliments. The success of his book led to a strong government support for Traditional Chinese Medicine and hence resulted in the formation of Qigong department in universities and hospitals that practiced Traditional Chinese Medicine. (Otehode, Utiraruto, 2009) Similar success stories in the 60s and the 70s lead to the increased popularity of Qigong.

Qigong or Chi Kung is the philosophy and practice of aligning breath, physical activity and awareness for mental, spiritual and corporeal health, as well as the development of human potential. It includes certain forms of martial arts and the spiritual awakening to one’s true nature. (Yang, Jwing-Ming, 1987)

The founder of Qi Gong, Li-Tian Da Shi, and his disciples – Masters Tian-Ying and Tian-Ping –obtained knowledge of the soul in three different ways: first by studying the old books of advanced cultures of Buddhism and Daoism as well as the store of knowledge of classic Chinese Medicine, second with their ability of clairvoyance (i.e. seeing and doing research with the “ third eye”), and the third by receiving sacred messages from the Universe. (The Soul, 2011)

Within Qigong, the theory of Yin and Yang suggests that the souls belongs to the Yin aspect – as do our thoughts, emotions, mind and Qi- whereas the physical body is connected to the Yang aspect. (The Soul, 2010)  And Yin and Yang are seemingly contrary forces that are interconnected and interdependent in the natural world- one cannot exist without the other. (Porkert 1974) Many natural dualities—e.g. dark and light, female and male, low and high, cold and hot— are thought of as manifestations of Yin and Yang.  There are several methods in the Qigong practice that help in bringing the Yin-Yang balance. These practices – such as Universal Celestial Language, Bronze Bell, Celestial Pagoda Practice and Celestial Sustenance Practice – are based on the fundamental principle that the physical, emotional and psychological healing processes depend on the extend to which we are able to open our hearts to all life on the earth. (The Soul, 2010)

These practices or physical movements facilitate cultivating Qi. The mere focus on the physical form is limiting but is the first step towards the gateway of spiritual awakening. The various levels of Qigong starting from the Bronze Bell Practice (Level 1), cultivating the language of heart by bringing in emotional and spiritual practice  (Level 2) eventually lead to connecting the individual energy with the oneness of the universal energy (Level 3). (Qigong class, Rudramadir, 2011)

The Bronze Bell Practice has been known in China for more than 1400 years for its amazing efficacy in healing illness and enhancing health. This practice is used to increase and strengthen energy fields, to restore vitality, and clear meridian channels, to facilitate healing and to activate untapped spiritual potential. (Bronze Bell Practice, 2011)

In the Celestial Sustenance Practice also known as ‘Bi Gu’, practitioners can uptake energy with their entire body directly from the nature and the universe and thus receiving everything their body requires directly from nature. According to Master Tian Ping of Germany, “ In principle, it is easy to receive energy and to enter a Bi Gu state because Universal Energy is everywhere – the universe is fair and impartial.  As long as your heart is open, the Universal Energy will inevitably enter our bodies- steaming in like fresh air through an open window. It is unfortunate that humanity has forgotten how to be naturally wide open and we must relearn how to be this way. Qigong is a technique that can help us learn how to relax, release our small selves and open our hearts. ” (Celestial Sustenance Practice, 2011)

In the Universal Celestial Language Practice also known as ‘language of the soul’, one can purify ones own soul and also communicate with other souls. Reactions to this practice vary for each person but most experience a great sense of relief “ as though a great weight has been lighted.”

All these practices including the Celestial Cross Practice enhance further cleaning of the soul. The practice encourages one to ask for forgiveness, not only mistakes in this lifetime but several countless past lifetimes. With this in-depth healing process for the layers of the soul, some problems and difficult to treat illness can be resolved immediately or, more often, one step at a time. (The Soul, 2011)

The core of Qigong practice focuses on gradually letting go of one’s own ego in order to develop more love, gratitude and compassion for others thus restoring our soul to its original state of purity and brightness.  According to the Chinese understanding, the soul consists of various elements situated in the heart, liver and lungs. Any disruptions can manifest physically, emotionally and psycho-spiritually. The first component of the soul called Ling resides in the heart; the second called Hun is made up of three elements is located in the liver and the third called Po made up of seven elements resides in the lungs. The Ling is known as the “breathing organ” of the Hun elements and hence serves as a protective function for the Hun. The practice of opening our heart leading to immortality is synonymous with opening the Ling and strengthening it with positive energy. The three Hun elements belong to Yang and the seven Po elements as assigned to the Yin.  Yuan Shen is a component of Hun that contains the primordial consciousness of the soul, stores a person’s Karma in several layers and these layers should be cleaned in one’s lifetime to achieve beneficial rebirth. Yin Shen, the second component of Hun, serves as a databank of our present life- each word, each thought, each action both positive and negative is recorded. After death, Yin Shen is what determines what our future life will be like. (The Soul, 2011)

I am beginning to just scratch the surface of this subject but I can surely say out of personal experience that practicing Qigong the last few weeks has already enabled me to put my ego aside, focus on and feel the subtle energies that exist in and around us and connect with the universe. As I practiced Qigong, I was able to feel the body’s rhythm and emptiness, as elegant, ethereal fields of waves joined in innumerable feedback loops to maintain a relatively stable structure. I was able to experience that my thoughts and feelings set off sympathetic vibrations -similar to vibrations I feel when I am in deep meditation- that could possibly produce transformation in days, hours, sometimes in minutes.

I was able to relate to what George Leonard suggests in his book, The Silent Pulse, “No longer are we concerned with questions of “ inside” or “outside” for these limiting categories do not exist in the realm of pulsing waves. Each body completes the universe and is involved in the universal evolution.” (Leonard, 2006)

I hope to continue my exploration on this fascinating subject and help to introduce this art to others so that they manage their stresses in life better and hopefully live a disease and fearless life. 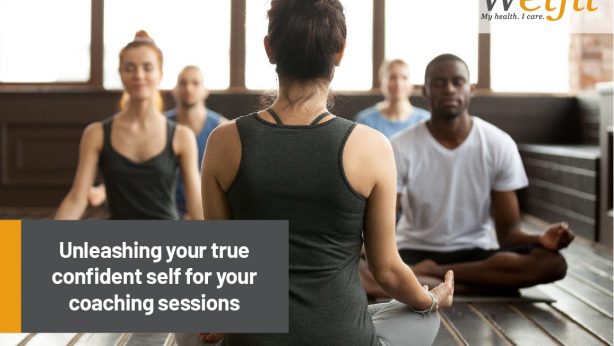 Unleashing your true confident self for your coaching sessions

The core foundation of health and wellness coaching is coach-client... 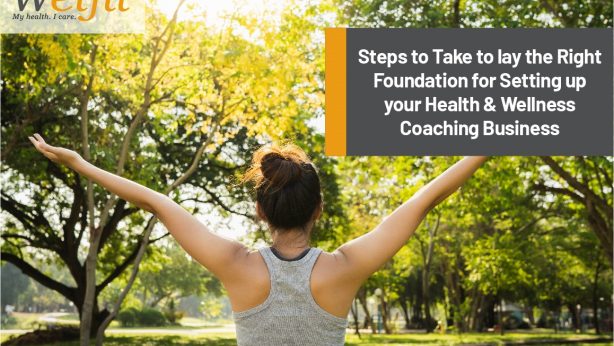 The industry of health and wellbeing is growing considerably with...