I find the similarities between Native Indigenous Medicine and Yoga Philosophy/Hindu Religion fascinating. I see synergies between the traditional yoga practiced by saints and gurus who denounced everything material to be closer to the ‘Brahman’ and the Indian/Hindu rituals practiced for several centuries, with the practices of the ‘Medicine Man’.  A decade ago, I began asking questions like who am I, why am I here and what my purpose in life is. Several Native Healers also questioned about their life’s purpose and asked similar soul-searching questions to realize their goal in life – to become a ‘Medicine Man’.  I however do not aim to be a native healer but can see myself working along with native healers to provide alternative healing solutions to my future clients.

For those of who, who do not know who Traditional Native Healers are, let me provide more information. Traditional Native Healers were people who provided medical leadership for the community in the past, for most native tribal systems. Just like yoga gurus, they were seers, visionaries, doctors and counselors for the people. They advised the people about good health practices, which were medico-religious in nature, and they taught them how to develop spiritually. And if the healer did not have an answer to a particular problem, he or she would seek a vision by consulting with the Great Creator and spirits to find solutions. During such times the shaman, would often see into the future. However, the path to become a healer was a not a easy one.

Contrary to modern western misconception, native healing is a complex system of learning far removed from the field of magic and quackery. It may not be like western standards of preparation, but in its own way

it is a very stringent and demanding. The novice must study new bodies of knowledge in the form of myths and prayer formulas, each designed for a different kind sickness, disease, ailment, or injury, including death related phenomena. During an apprenticeship, the novice studies the elderly shaman’s philosophy, expertise, methods and approaches to healing. At this time, he or she is under strict supervision. In some situations, the entire process may start all over again because of a new dream, vision, pain or psychic-mystical experience. Such a new occurrence allows providing the apprentice with an opportunity to gain more diversified knowledge, skill, and experience; it also provides him or her with depth and breadth in the profession.

Similarly, at my yoga teacher’s training program in Kerala, India at the Sivananda Yoga Center about a decade ago, the aspiring students had to live in an enclosed ashram for a month, with simple food with little or no salt, simple clothing with no jewelry or makeup and we all had to practice four hours of yoga everyday combined with daily meditation, pranayam, chanting and reading spiritual scriptures and Hindu philosophy. The steps might be a little different but the core meaning behind the process is the same. It reiterates my belief that there are several paths one can take to be closer to god or be more connected with ones soul but they all have the same end objective.

The practice of eating simple but very little food, isolating oneself from the noise and clutter of the world, being in nature in order to be closer to your thought process and more importantly, closer to spirits and capture lessons or decipher dreams has striking similarities to how I was inducted into yoga.  The spirit and the dream world however is not a practice associated with becoming a yoga teacher, at least to the best of my knowledge. Hence, this was a new concept for me to grasp. But being an avid dreamer, I have always questioned the significance of my dreams and if I was to learn something from these experiences I have been having, especially the ones where I actually saw or experienced spirits.

I also fond similarities in the Hindu tradition and Native Medicine practices associated with the menstruation cycle of women. In the Hindu culture in the older times, woman were not allowed in religious ceremonies or temples, were usually isolated to their rooms and hence were discouraged from mingling with men.  I had shunned this practiced growing up, since I thought that it was a practice whereby men wanted to showcase their superiority over woman and also, when I questioned the significance of this practice, no one had any answers. I am glad to get some logical answers through the Native Healing practice and I am pretty sure the Hindu culture had similar reasons. I now understand that during your ‘moon time’, the reasoning behind isolating oneself is that it allows one to connect with the mind, body and soul. It also allows the woman to replenish herself and provides an opportunity to center her and bonds her with the earth matrix.

What I am finding difficult to relate is the presence of animals in our dreams and that these animals have a definite message for us in the form of medicine according to Indigenous Medicine. I don’t recall ever seeing an animal in my dream. It could highly be possible that I do not spend any time in nature and hence I am not connected with the animal and plant spirits. As I pondered on this idea for the last couple of days, the realization came to me that in the Hindu mythology, most gods have an animal associated with them too. The most popular god known is Lord Ganesha who is symbolic of ‘removal of all obstacles’. In India, before beginning anything new, Lord Ganesha is worshiped. It makes me want to find out the significance of other animals in the Hindu mythology and if they have any messages associated with them. I will continue my research and seek similarities if any and will try to discuss those in the following blogs. 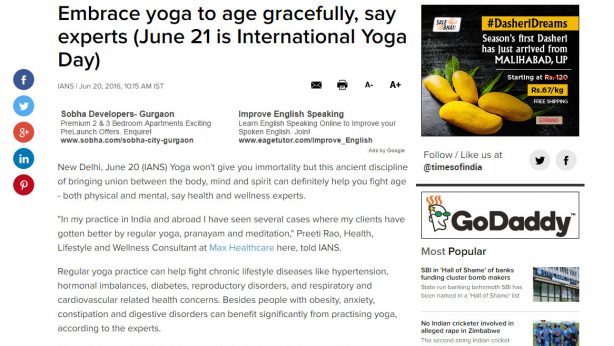 Yoga Asanas and their benefits

According to Swami Sivananda one can achieve perfect health by...